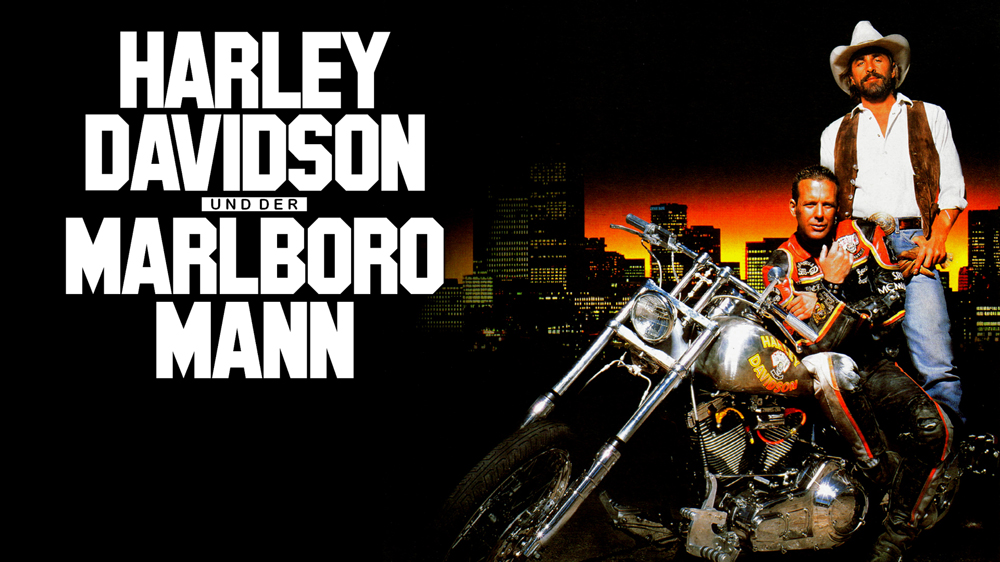 Harley Davidson and the Marlboro Man contains thrills and excitement that never let up with surprise twists at every turn! In the lawless world of the future, drifters Harley Davidson (Mickey Rourke) and The Marlboro Man (Don Johnson) help a friend save his bar by robbing the bank trying to takeover his property. But this is no ordinary bank and the armored car they roll is filled not with money but drugs! Harley and Marlboro
become the objects of a ruthless manhunt led by deadly and unstoppable henchmen.

“...Hotly staged bike chases" (Variety), state-of-the-art weaponry and "excellent explosions" (Hollywood Drama-Logue) form a deadly combination in this "lively" (Los Angeles Times) action ﬁlm about a couple of modern-day, motorcycle-ridin' Robin Hoods."
"...Right from the opening moments of "Harley Davidson and the Marlboro Man," the pungent musk of manliness saturates the screen. Audiences can practically smell the sweaty stink of ruggedness and machismo..."
“...the script by Don Michael Paul makes its intentions known on a literal level when Don Johnson comments that he and Rourke are a dying breed. His meaning is what, in my eyes, makes the film a surprisingly intriguing watch because he's alluding to a larger cultural change that was taking place at the time...the rising tide of the political-correctness movement, where the testosterone-fueled masculine archetype was fading away...the only way to battle the ever- growing wave of sameness is in rediscovering that masculine archetype...”

“...…It’s a modern (for the time) version of of an old Roger Corman B-movie, and in many ways predicted the FAST & FURIOUS franchise, with the emphasis on close-knit groups of outlaws becoming “family” and fetishized vehicles, here being motorbikes rather than cars.”

“...…Harley, if you were shooting for shit, you wouldn’t get a whiff…”

“...…Some action movies are so over the top they sort of become fantasy by accident, so overcharged, chromed up, packed to the brim with bar fights, motorbikes and sexy chicks that they seem to exist on a plane where only those things exist, like they sprung forth from a shared dream that Bon Jovi and Patrick Swayze from Roadhouse are having. "Harley Davidson & The Marlboro Man" is one such movie and really deserves a legacy of more acclaim than its gotten. It’s a road movie, a biker flick, a high powered ultra violent action palooza…"
"...This thing is built of bourbon, beer, chrome, blood, bullets, sexy chicks, cigarettes and a whole lot of attitude, and I fucking love it to the bones…”